skip to main | skip to sidebar

So now that Rocklin can make a quick escape out of his crib, we've had to take the front part of his crib off and transform it into a toddler bed. I was SO not ready for him not to be in a crib yet, but what do you do. I have to say, he is great at bedtime. We go in, say prayers, give kisses and he lays down and doesn't get out of his bed until morning. Nap time is a bit of another story...I usually have to go in a few times and remind him to lay down and go to sleep. He likes to sneak out of his bed and go over to his couch and hang out with all his toys and stuffed animals. The other day I found him in there asleep with his "crew" on his couch: 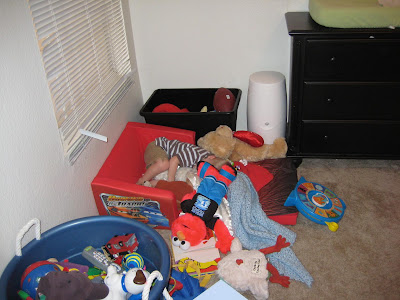 I took this picture last night. Rocklin had fallen asleep with a tight grip on his Cars bag that his Grammy and Gramps had given him a while back. He likes to be surrounded by "stuff" these days. He doesn't leave his room without his white and blue blankies and usually a stuffed animal in tow! 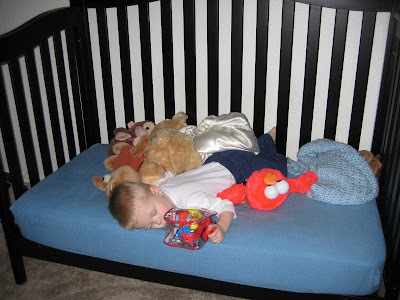 This year I really wanted to find Rocklin a puppy dog costume for Halloween since he LOVES dogs. I didn't see any (affordable) cute ones out there, so on a whim I hit up Goodwill this afternoon and found this cute puppy dog costume for $5.99! He loves it - he was getting so excited trying it on and was panting like a dog. Now I'm excited for Halloween! (Sorry the video is sideways...you'll have to just tilt your head). 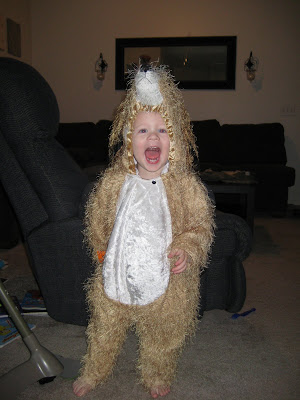 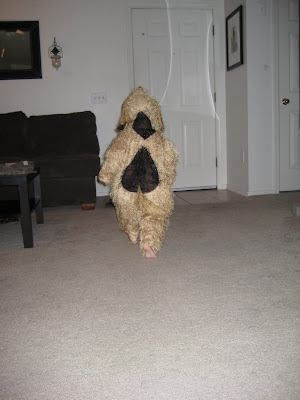 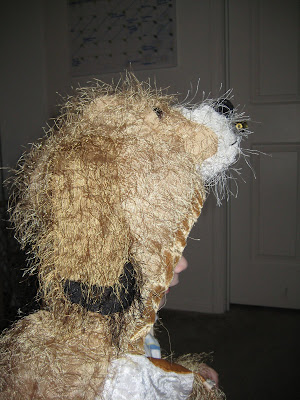 I always comment about how Rocklin is part child, part monkey. Well, today he proved my point. He earned himself a time-out (which he get for climbing up on my desk while I'm working and he knows better). I put him in his bed and told him I would come and get him out in 5 minutes. Well, about 2 minutes later, I hear a knocking on his door. I go in, and sure enough, he had climbed out of his crib! I put him right back in his crib and grabbed the camera so I could get this on tape. Looks like we'll be switching to the toddler bed a little earlier than I would have hoped! (And it probably doesn't help that I'm laughing at him while he's climbing out!!).

Posted by Adam & Kristen Birkmeyer at 9:58 AM 9 comments:

So, my fabulous Sister-in-Law, Sarah, has started a new, fun project and has opened an etsy shop! She's making and selling these oh-so-cute-and-sassy cash-budgeting system organizers called Divvy Organizers. They can also be used for organizing bills, coupons, receipts, etc. I have one that she made for me (it's pink with green and yellow paisley accents....SO cute) and I adore it!! If you like to be organized (or if you're looking to get more organized), then I would highly recommend checking out her stuff. Her fabric choices are just beautiful and the quality is awesome. You won't be disappointed! 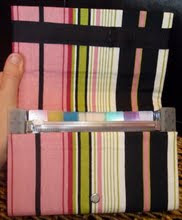 Aimee's name was randomly chosen (a.k.a. Rocklin drew a name out of a hat for me) to win the paper-crafts goody bag! Thanks to everyone who read my post and let me share my love of card-making!

Aimee - be looking for a package in your mailbox soon!

Adam & Kristen Birkmeyer
Arizona
Adam and I were married in the Summer of 2006. We had our son, Rocklin, in January 2008 and are expecting a baby girl in June 2010. We are currently living in Arizona and love keeping in touch with family and friends through our blog. 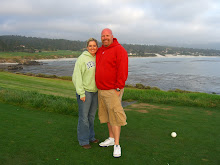 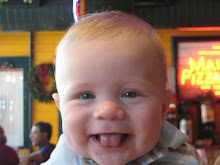